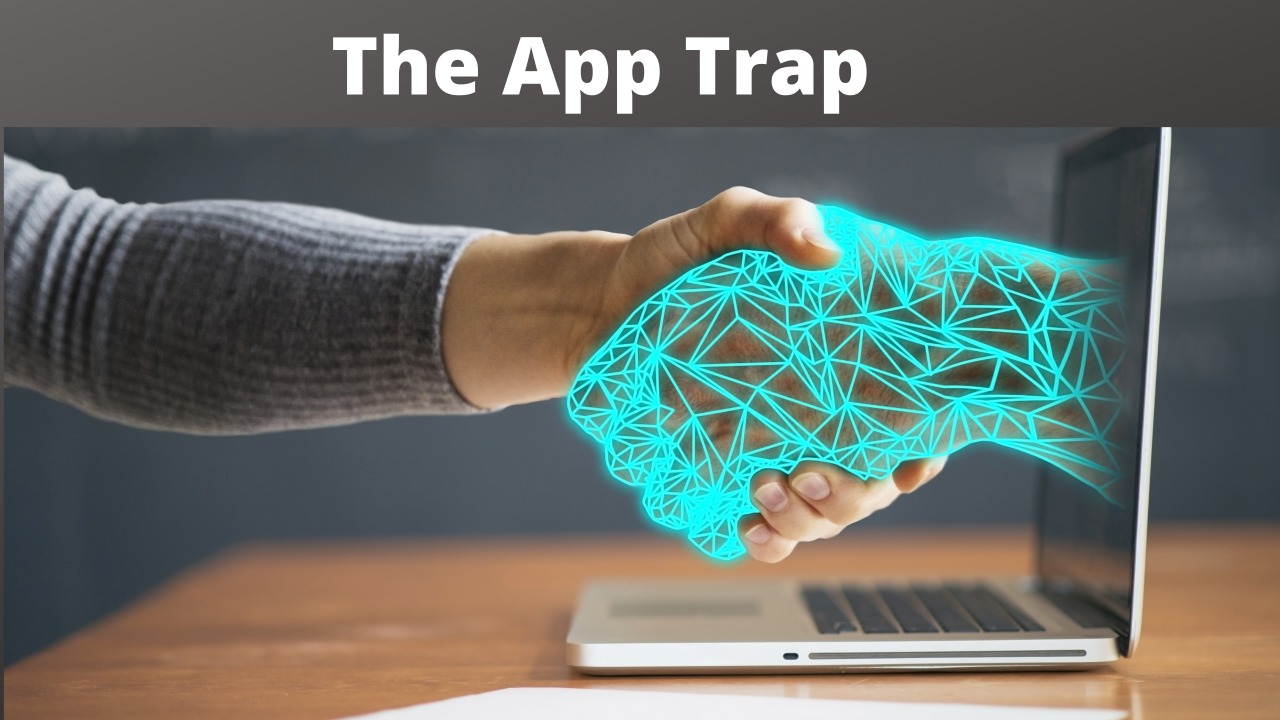 •Taking us into virtual reality

Apps, mobile phones, gadgets and the internet have made their way into our
lives. Today’s generation or Gen-z as we call it are addicted to it more than the
older generations. In today’s article we will shed some light on the app trap
and also learn how the corporate sector and the world centralised system
charted this plan of getting us hooked onto the virtual world.

• The World before Apps.

Let’s start by going backwards 100 years and try to understand what has
changed, before 100 years there was no such thing as the internet or apps.
People used to go to shops to buy the daily needs, they used to visit the bank
for transactions, children went to school to study make friends and have a
healthy and social childhood, employees used to go to work in the offices.
Overall, we used to be going out for any and every other reason. These chores
used to keep us fit as well and also make us more social and outgoing.

• The Dawn of Internet.

Once the computer and internet made way into the lives of people, we still
didn’t realise the full capacity of the technology. Technology was sold in the
name of making our lives easy in every way possible.
Yes, technology did make our lives easy but at what cost. Slowly but surely all
the needs of a person in daily life were shifted , instead of going out to get
work done now it’s as simple as opening an app and ordering things, now is
made possible right from the comfort of your home. May it be education for
your children, banking, shopping, relations, communications and much more.
Everything that you do today and just by sitting in your house, looking at the
screen of your phone. Yes, technology has given us comfort but is it a comfort ?
or a trap ? That was planned to keep you in a jail like system where the best
part is you don’t even know you are jailed.

Yes apps have taken over and are keeping us engaged on the internet but there
is a bigger reason why we are being given this technology in such a way and
that reason is virtual reality. Virtual reality is a concept where people are taken
to a virtual world which will feel real more than the reality of the world you are
living in right now. To take us into that world has to be a slow process.

The biology of human being would not have allowed us to directly take a jump into
virtual world and spend hours in that world.
First, we are given a very small dose of the internet and make us familiar and
comfortable to the technology and see how is the response and adaptation. In
the second stage through corporate funding into the tech sector this dosage
was slowly increased to the level on which we are today.

For example, if in today’s time we tell a person from Gen-z to not use their mobile phone they
may get irritated or uneasy for the whole day without using the mobile but if
you do the same with a 60-year-old person the effects that you may see would
differ. This is because the person for Gen-z has seen and used the mobile and
internet from the time they started understanding life. It is their way of
communicating with friends, getting updates about the world and also use the
technology in everyday needs.

The person who is 60 years old has seen a very
different life they would go out on a walk, sit with a family member do
something productive at home and much more. The change that we see in Gen
-z is because their mentality has been tampered to be dependent on the tech
for everything.

Gen-z are children in the age group of 14-30. This age group has been the most
dependent and exposed to the technology and the internet. The internet and
social media have tampered with the overall outlook this age group has
towards life. For this generation every solution to a problem is internet. May it
be their love life or dating patterns, socialising, education, getting a job
everything is connected to the internet.
This dependence on the internet as effected this age group mentally, physically,
emotionally and in many other ways of life. It maybe peer pressure to get the
latest device, to look handsome or beautiful than their friends, the
communication and relationship with parents it has affected them in all forms.
The best example of this is the dinner table.

Before technology there was a saying “the family that eats together stays together”.

Do you see that today ?
forget dinner table every family prefers to eat in their own room scrolling the
internet, keeping themselves well informed but at the same time they are not
informed about their own family unless they are on the internet updating their
status. This shows what the future of humanity will depend on the technology
and virtual reality.

• The Role of Dopamine.

The human brain has the chemical dopamine which is released when a person
tries something new, or when he/she is excited or has archived a goal. Before
technology came into our lives there was a good balance of dopamine release
in our body for time. This release happened due to big and small life events in a
persons life. Drugs were also a reason for dopamine release and one of the
main reasons why an individual would get addicted to drugs to feel that happy
high through dopamine release.
Through research and study many main stream scientists understood the use
of this chemical dopamine and this knowledge was used by corporates and the
centralised systems .They started using technology to stimulate this chemical in
our bodies. This was achieved by creating apps that get us addicted to them
and these apps give us new experience which release dopamine in an
unnatural way.
These releases are not only limited to the viewers of an app. This is also related
to the creators. Every time the creator uploads their creation like a video or a
post it receives engagement. For the creator dopamine is released when they
achieve new levels of engagement like more views, comments and subscribers.
So we can say apps and the internet not only make you lazy but also addicted
to them and this we can see in the Gen-z. The number of young generations
getting into depression or the pressure to be better than their peers is playing
with the mental health of the future in a very big way.

In today’s article we have discussed all the negative points about technology
and the internet. This is because the 2% of the people who are running the
system are using it in a negative way. The same technology can be used in a
mindful way with limitation and apps which are really useful in the growth of
our society and system.
Looking at the given situation in the world we would need a a Neo from matrix
in the near future to save us from the addictive virtual reality. We can also live a
life shown in the movie ready player one where everyone is competing in the
virtual world but the chances of we standing for ourselves and creating that
positive change looks very bleak.